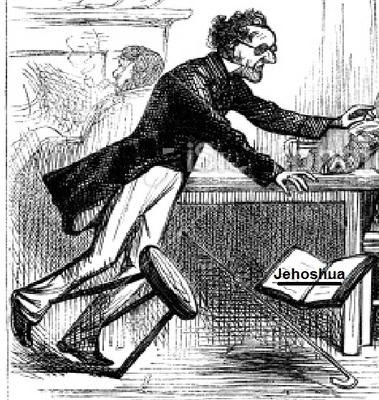 “If people can’t see what God is doing,
they stumble all over themselves;
But when they attend to what he reveals,
they are most blessed.”
(Proverbs 29:18)(MSG)-BibleGateway

The sudden realization that Christ’s true name
was never “Jesus”, but rather Jehoshua, has
been shocking to learn.  Some will welcome this
truth, while others will become angry and be
stumbled by it.  How so ?

Humans are creatures of habit, and while some get
bored easily and constantly look for new gadgets
to amuse them, there are many who do not like change.
The Messiah has been called “Jesus” ever since the
Roman’s took over Christianity as a state religion.
That’s a long time.  So much has been said and done
in the name of “Jesus”, that to call him anything but
that – will appear as sacrilege in the eyes of many.

But that doesn’t change the fact that “Jesus” never
was his name.  Christ was never called by that name
while he was alive on this earth.  His Jewish
Apostles never called him that, and the earliest of
Christians never called him that.  It was only the
Greek-speaking apostates, who changed his name to
suit their pagan appetites for a god-man with
3 heads to suit their trinity tradition of pagan
worship.  And along with all these changes, was
a complete destruction of Christ’s Jewish heritage
and his Jewish name – which translates directly
into English as did his Father’s name.

Since Jehovah’s Salvation – called “Jehoshua” is
what Christ wants to be called, we should take his
request very seriously.  It is not a matter of
holding onto tradition, or a matter of pleasing
those who find the erroneous name “Jesus” to be so
dear to their heart.  No, it is a matter of “TRUTH”.
Jehoshua came to the earth to bring mankind back
to truth.  NOT to be molded into a god that mankind
thinks he should be.  Jehoshua was sent by Jehovah
God, to bring mankind back to him.  Christ had an
objective of turning the Israel of God back to
truth again.

The Jews had strayed away from Jehovah and replaced
his name with “LORD”.  They had traded God’s commands
for the “traditions” of men.  Christ condemned them
for doing that.  How much more so will Christ condemn
those who have abandoned his truths, for the pagan
traditions of Christmas and Easter which involve
numerous sun-gods and fertility goddess worship.
But worse yet, the trading of Christ’s true name for
a Graeco-Roman god named “Zeus”.  It is not by sheer
accident that Christ’s name sounds like “G-Zeus”.
It was intended that way.  History books admit that
the Romans intentionally traded the true name of
“Jehoshua” for the “Iesous” (hail zeus) of pagan
origin and pagan appeal.

Rome has never been interested in truth.  Her form of
the gospel was to spread Christianity by brutal force,
which is something that Christ would never have
agreed to.  The Holy Roman Empire used Christ as her
battle cry – to murder, rape, torture, and destroy
the objects of her mass conversions in their newly
created quasi-pagan form of Christianity.

No wonder that Christ predicted that in the last days
that many would cry out to him during Judgment –
“Didn’t we do so many powerful works in your name?”
and he will say in return to them – “Get away from
me – the things you did were not authorized by me –
you workers of evil.”  Not only would they be doing
things that Christ would not approve of – but they
would even be doing them in a name that he never
heard of.

Yes, in the name of their conjured god “Jesus”,
which means to hail-zeus,  they would be doing
bloody horrible deeds and trying to give Christ
the credit for it.  His reaction will be to reject
them, reject their deeds, and reject the unholy name
that they have glued upon him.

So will God’s true people follow in this erroneous
path of calling the Messiah by a most dishonoring
name?  When faced in these last days, with the
importance of using Christ’s true name – will they
be stumbled ?  Those who agree to return to Christ’s
name, Jehoshua, will be marked by God as wheat-like
christians;  while those who refuse to return to
Christ and his true name, will be marked as weed-like
ones that will be uprooted and destroyed in the
coming harvest.  The scriptures testify to this fact.

Just as God’s people returned to Jehovah and returned
to using his Name – so too,  God’s people must
return to the Messiah and his true name.

Will you be stumbled at this ?
I hope not.

“Jehoshua was the name given to Christ by his
heavenly Father, Jehovah God.   Many years
after his death – Rome changed his name to
suit their pagan heritage and to please their
pagan converts.”
–Personal Names in the Bible
by Dr. W.F. Wilkinson, M.A.
Joint Editor of Webster and Wilkinson’s
Greek Testament: pages 342-343.

“Ieous” was Greek for “Hail Zeus”,
which was translated later into English
as “Jesus”. And this error has continued
to the present.”
–Personal Names in the Bible
by Dr. W.F. Wilkinson, M.A.
Joint Editor of Webster and Wilkinson’s
Greek Testament: pages 342-343.

“The name Joshua (Jehoshua) derives its greatest
importance and highest sanctity from the fact
that it was sacredly chosen as the name to be
borne by the Messiah.”
–Personal Names in the Bible
by Dr. W.F. Wilkinson, M.A.
Joint Editor of Webster and Wilkinson’s
Greek Testament: pages 342-343.

“This name was later corrupted and altered
into the name Jesus.”
–Personal Names in the Bible
by Dr. W.F. Wilkinson, M.A.
Joint Editor of Webster and Wilkinson’s
Greek Testament: pages 342-343.

“‘Jesus’. That was a name given to him many
years after His death. Rome wanted to remove
any ‘Jewishness’ from the new church. So they
eliminated His Jewish name and blended the name
of ‘Zeus’ in order to make it comfortable for
all those who had previously worshipped the Greek
and Roman gods.”
-Winds of Praise Broadcasting
Believer or Follower?
The Sound of the Shofar
By Jon Thompson

“Since Zeus was the top god of their experience,
attaching the name Ioesus (hail Zeus) to
Yahshua (Yehoshua) – gave Him top priority
in the worship hierarchy.”
-Winds of Praise Broadcasting
Believer or Follower?
The Sound of the Shofar
By Jon Thompson

“Now what I am commanding you today is not too
difficult for you or beyond your reach. No,
the word is very near you; it is in your mouth
and in your heart so you may obey it.”
(Deuteronomy 30:11,14) (NIV)

WHY  WE  MUST  MAKE  THIS  DECISION

“There is salvation in no one else!
God has given no other name under heaven
by which we must be saved.”
(Acts 4:12) (NLT)-BibleGateway

“They will stumble over one another
as though fleeing from the sword,
even though no one is pursuing them.”
|(Leviticus 26:37)(NIV)-BibleGateway

“Therefore, thus says the LORD,
‘Behold,  I am laying stumbling blocks
before this people. And they will stumble
against them…”
(Jeremiah 6:21)(NASB)-BibleGateway

“Then He shall become a…rock to stumble
over…”
(Isaiah 8:14)(NASB)-BibleGateway

“If people can’t see what God is doing,
they stumble all over themselves;
But when they attend to what he reveals,
they are most blessed.”
(Proverbs 29:18)(MSG)-BibleGateway

“Some of the wise will stumble,
so that they may be refined, purified
and made spotless until the time of the end,
for it will still come at the appointed time.”
(Daniel 11:35)(NIV)-BibleGateway

“Blessed is anyone who does not stumble
on account of me.”
(Matthew 11:6)(NIV)-BibleGateway

“God warned them of this in the Scriptures
when he said, “I am placing a stone in Jerusalem
that makes people stumble,a rock that makes them
fall.  But anyone who trusts in him will never be
disgraced.”
(Romans 9:33)(NLT)-BibleGateway

“For whoever keeps the whole law and yet stumbles
at just one point is guilty of breaking all of it.”
(James 2:10)(NIV)-BibleGateway

“And,“He is the stone that makes people stumble,
the rock that makes them fall.” They stumble because
they do not obey God’s word, and so they meet the
fate that was planned for them.”
(1Peter 2:8)(NLT)-BibleGateway

“…at harvest time I will say to the reapers,
Gather the darnel (weeds) first and bind it in
bundles to be burned, but gather the wheat into
my granary.”
(Matthew 13:30) (AMP)-(BibleGateway)

“I will tell the harvesters: First collect the weeds
and tie them in bundles to be burned; then gather
the wheat and bring it into my barn.’”
(Matthew 13:30)(NIV)-BibleGateway

1 thought on “WILL GOD’S PEOPLE BE STUMBLED BY THE NAME OF JEHOSHUA?”